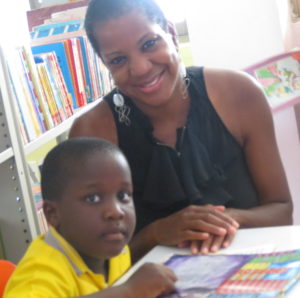 Caroline Brewer would not be who she is today – author of 11 books, editor of five books written by students, a former teacher, fearless literacy consultant, wildly successful tutor of children as many as nine grade level behinds in reading, and founder of the Happy Teacher deliberate system -- if it wasn’t for children. Thousands of children, including 2nd graders who inspired her to write her first book.

Second-grade teacher Angeline Hall-Watts was a friend of Caroline’s when Caroline wrote a poem about hope and healing, shortly after 9/11.  Angeline wanted Caroline to share that poem with her students. Caroline was reluctant. She had adults in mind. But Angeline persisted, and Caroline finally decided to turn the poem into a story and the story into a book, called Kara Finds Sunshine on a Rainy Day. Caroline published the book on her own and donated all profits from the first 500 copies sold to charities supporting orphaned children in Uganda and homeless children in Nicaragua. A few months later, a boy in a group home for abused and neglected children in New Jersey, where Caroline lived, wrote that Kara Finds Sunshine “turned my life around.”

That 12-year-old boy’s heartfelt words moved Caroline to a life bursting with all kinds of new activity – and books! Since Kara Finds Sunshine on a Rainy Day, Caroline has written and published 10 other books, and received tons of gratitude from children and adults who say the story transformed their lives. Praise also has flowed from surprising sources, such as a man battling alcoholism, a widower, a father facing a struggle with his teen daughter, and grandparents.

But it’s mostly because of the children that Caroline keeps writing. Children like Ivory, who moved up three grade levels in six months after being tutored once a week by Caroline. And Elena (not her real name), who was diagnosed as borderline mentally retarded but learned to read and write her own little books in just months because of her work with Caroline. And John, who went from reading on a kindergarten level to third-grade level in three months because of his teacher, who was trained by Caroline.

Caroline writes stories that are hope-filled and action-packed, that uplift, enlighten, tickle, and amuse while taking readers on rhythmic journeys of language and love. She sees herself as an artist who routinely colors outside the lines and one from whom readers can always expect the unexpected.

Caroline founded Unchained Spirit Enterprises, a publishing and consulting company, in late 2001. She’s published seven children's books since then, some of which have traveled the world, been translated into other languages, and taught in a children’s literature course, alongside Harry Potter and the Sorcerer’s Stone and other classics.

Educators found Caroline’s books so fascinating and inspirational, they invited her to create literacy workshops for classroom teachers. Those workshops ultimately led to Caroline's four books for adults. 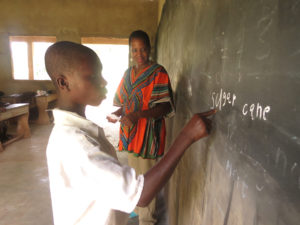 Caroline has found teaching children to read (and write) one of the all-time greatest joys of her life. She did it for years for free and taught other adults how to successfully do it, often for no charge. Caroline makes it clear that teaching children to read is hard labor. She’s seen them break down and cry, become paralyzed with fear, and engage in angry rebellion.  She’s borne witness to adults exploding in frustration and nearly collapsing in tears as well. But Caroline contends that teaching children to read is a gift of love, to them and the giver. During the process, both adults and children grow. They both grow to become more patient and persistent, and they both are rewarded with a major sense of accomplishment that will endure and bless so many others. And of course, reading lays the foundation for success in almost every other aspect of children’s lives.

Caroline’s work as an author and literacy activist has led her to consult with the Indiana Department of Education, the D.C. Public Schools, the New York City Public Schools, and schools in New Jersey, Virginia, Maryland, Michigan, Indiana, and Ohio. Caroline joyfully has made presentations to more than 25,000 teachers, children, parents, and librarians across the U.S.  She was a featured workshop presenter at the 2014 Teaching and Learning Conference, hosted by the National Board for Professional Teaching Standards. There, she launched Books Unbound, an inter-active workshop that trains teachers to use children’s books to inspire reading love and achievement. On November 17, 2018, Caroline will speak at the National Council of Teachers of English’s conference in Houston, on the panel: What is Needed to Enable Students to Use Their Voices in Powerful Ways? Caroline will share insights from her experiences as a writing instructor and editor for student publications, including the recent National Day on Writing-inspired book For the Obamas: A Big Book of Thank Yous, as well as What You Don’t Know by Looking at Me, and the student-supported C is for Cocoa.

Interestingly, Caroline began writing on purpose as a child. She penned poems for her mother as gifts for her birthday and holidays. Some years later Caroline’s passion became her profession. She earned a B.A. from the College of Arts and Sciences at Indiana University, where she majored in broadcast journalism. Her journalism background includes newspapers, TV, and radio, and service on two Pulitzer Prize juries. A collection of her Sunday newspaper columns was nominated for The Pulitzer Prize. The debut column was entered into the Congressional Record. Caroline also worked as a research consultant and producer for Dr. Camille Cosby and the National Visionary Leadership Project, whose goal was to produce books and documentaries about pioneering African-Americans, such as Ray Charles, Ossie Davis and Ruby Dee, Gordon Parks, and Maya Angelou.

Caroline is also recognized as a pioneering marketing, promotions, and public relations professional. She has written and pitched news releases, blogs, and op-eds, set up news conferences attended by media such as CNN, MSNBC, the New York Times, the Wall Street Journal, and the Washington Post, developed and coordinated media and public outreach campaigns, written speeches and scripts, guided the development of promotional videos and photos, website content, promoted and responded to legislative issues, overseen marketing and promotions for retail establishments, speakers, and authors, including event planning and publishing. But it’s how Caroline works -- with kindness, thoughtfulness, and an unrelenting drive for remarkable outcomes -- that her clients and colleagues find awe-inspiring. She has a reputation for being a leader who takes projects further faster, with uncommon grace and sensitivity.

It’s National Family Literacy Month & Here’s What You Can Do About It!

Five Things You Should Know About Barack Obama: A Hip Hop Tale